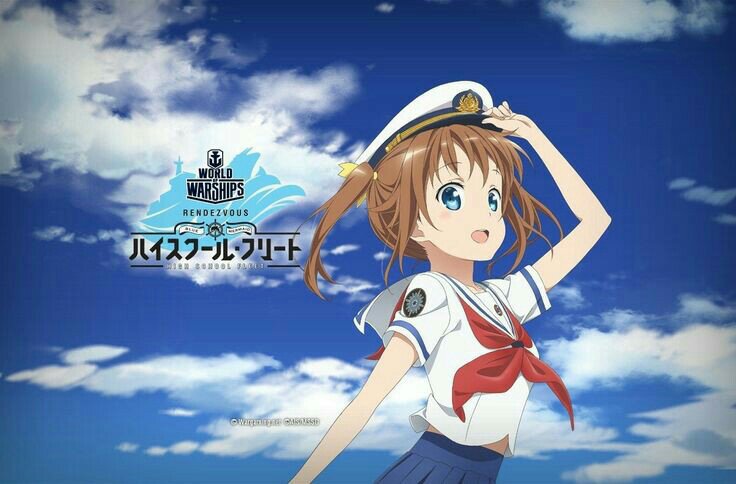 The Japan we see here now is submerged in the ocean since 100 years after plate subductions. Since the same thing happened to other countries as well, they were all built up on the ocean expanding the routes resulting in protection of these residents. In order to do that, an employment plan was launched for women in order to protect the sea and its inhabitants sailing across the ocean, and going with the name ” Blue Mermaid “. The motto here means sailing the sea they live in and protecting it is what it means to be a blue mermaid.

Now then, lets talk about the main story. As you must have heard this before ” A calm sea never makes a skillful sailor “, meaning in order to become a skilled sailor, you need to learn to go through tough times, even if your life is on the line. In simple words, difficult times strengthen a person. The story revolves around Misaki Akeno who had a dream since her childhood to become a skilled blue Mermaid, and in order to do that, she joins Yokosuka Girls’ Marine High School. She was appointed as the captain of the ship Harekaze and her best friend China Moeka as the captain of Musashi. Now whats fun the fun part here? You must think how can it be an interesting anime with all our crew mates as girls who are all weak and fragile? Well that’s what I thought in the beginning too, but after watching them go through so many situations where there life was on the line every second, but still they manage to come out unharmed.

But, things don’t always go the way you want. When the crew mates of Harekaze reached the summing point, something unexpected happens which leads to the instructor’s ship to attack the Harekaze. Now what would they have done? In order to protect themselves, they countered the instructor’s ship in self defence and sunk it. Well we know thst they didn’t do it on purpose, but the officials thought they did it on their own free will and marked it as an act of mutiny. Now its the captain’s job to keep her crew mates safe and travel the sea with caution since they turned everyone against them, and also encounter the real threat leading to this problem.

Now lets talk about some of our main spotlights here. Starting with Misaki Akeno, the captain of Harekaze. My first impression of her made me think that she was a lot cheerful, good at conversing with others and making friends, and must lack knowledge about technical stuff. But, after watching her make decisions so precisely at tensed situations and with her intuitions to take actions with any problem they faced, showed us why she was given the title of a captain. Misaki looks at her crew mates as equals since for her, everyone is family at sea. She always looks after them, gives advices and also praises them on their achievements. But… Her only problem is she worries a lot, she often leaves the deck to save someone knowing that the captain should never leave his position. But in the end, her personality is what makes others to follow her.

Other protagonists we can talk about are the bridge personnel’s. It consists of six people including the captain. They all have graceously devoted their skills and talent to support the captain. So if we talk about our second well known character, that is Mashiro Munetani, the deputy captain of Harekaze. She is pretty shy when it comes to bringing up a conversation. She doesn’t likes it when the captain doesn’t rely on others and runs off on her own. What I like is the way she gets so scared when she is around a cat, and unfortunately a cat did sneaked onto their ships, sooo poor Shiro chan.Then we have other characters such as Shima Tateishi, a soft spoken girl incharge of artillery of the Harekaze and a big lover of curry. Then Mei Irizaki, she is pretty energetic and hyper type person who loves to fire on others instead of getting fired on herself, she is the torpedo officer. Kouko Nosa, a bit dramatic person who like to express her thoughts using Yakuza movies as reference. And lastly we have Rin Shiretoko, the chief navigator of Harekaze. She is really motivated and strong willed from inside, but always gets scared from outside at tough situations. Well these were some of our leading actors. I didn’t mentioned the whole crew, but I do acknowledge there efforts on keeping Harekaze win every obstacle.

I always had the urge to travel the sea when I started one piece, and this one also gives the same feeling. Harekaze went through many obstacles and battles, each fight with their crew members life on the line, but they always worked together and pulled it of. So, i have a lot of favourite scenes in High school fleet, but my best moment is the time when the final battle was going on between the Harekaze and Musashi. Since the crew members of Musashi were also infected with the same virus that brought this terror on the sea, they had to end it before reaching the city. And it was really admirable that even being at disadvantage when it came to firepower and strength, they were still able to defeat them and win the battle in the end. And I felt so happy at the moment when the other ships such as the Admiral Spee, Tenjin, Hiei… They all appeared in the end to back them up.

The animation and music was off the chart. It really makes you feel as if you are the one of their crew mate riding the ship. The soothing sound of the ocean, the firing if canons, the blast of torpedos, and the sound made by the ship when it is in motion, all this seem so realistic when you hear it wearing earphones. And the music was amazing as well. For an anime with full on adventure and action, it was obvious to have an opening with some intense battles scenes and rising spirit music. Its really amazing how 31 students with 2 cats can accomplish so many things which is pretty hard for even Blue Mermaids. I was impressed by the cooperation and teamwork they showed to survive through so many situations. So finally I can say it that was a really great experience watching cute little Moes accomplish so many things even though they were still inexperienced.