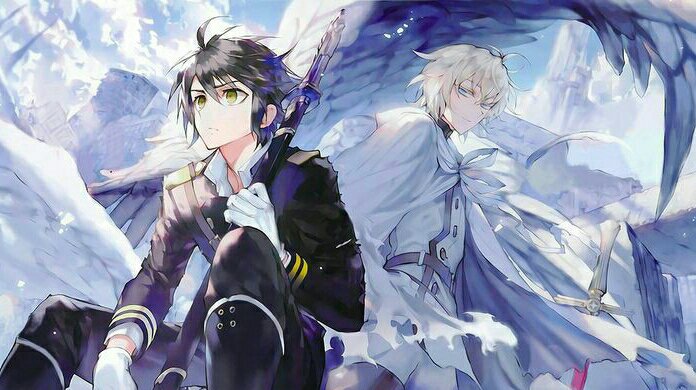 English Title- Seraph of the End

What does it means to be a family? Does blood type matters if you call someone your family? If thats not the case, then person present on this planet is related to each other as a big family. Here we get to know some people who may have lost their previous friends and family, made new friends who they have not known for even months, but they still care for each other so much even if they have to turn against the world. Our little friends are still inexperienced and don’t know much about each others past to share their burdens of pain, but that doesn’t mean they’ll turn a blind eye on them when they are in trouble. Because here, using those trapped emotions of failing to protect the precvious family members still haunts them and now they know exactly what family and friendship means when you are alone. Now then lets see how everything turned out in the end…

The story starts the time when a mysterious virus started to attack people leading them to their death. Due to some reason, children below 13 years were not effected by this cause, still most of the human beings died resulting to population decrease. Strange creatures started to roam killing the remaining humans. Thats when the vampire came and announced that they will protect the humans, instead they need their blood. Humans didn’t had other choice, they wanted to see another day even if it means giving their blood a little. Now comes out main protagonist, Yuu and Mika. Both of them along with some other younger children were also in custody if these vampires. They lived in an orphanage but because of the current situations they had to live under the vampires. Yuu was a hot headed kid who charged whenever he saw others suffer, but Mika always did things after thinking about it, he saved Yuu quite a lot of times whenever he got himself in trouble.

Both of them had a dream of get out that place and live freely with their family, but during their escape they were all spotted and everyone got killed accept Yuu. He had no choice but to run and save his life since he thought those were Mika’s last words. Four years passed away after that incident, Yuu became a member of Japanese Imperial Demon Army in order to avenge the death of his family, on the other hand his family, that is Mika who he thought was dead, was still alive and part of vampires. At one side where we have Yuu who don’t want to get along with anyone since he doesn’t want to feel the same pain again, same goes for Mika who still lives under vampires and as a vampire to save Yuu. Things get interesting when Yuu’s training starts in order to become a part of Moon Demon Company who slay vampires which was Yuu’s biggest goal from the start. In the end, it turned out pretty sweet and sour. Some good things happened and some bad stuff too, the rest we’ll see in season 3.

Now lets talk about our main protagonist, Yuuichirou Hyakuya. He is pretty hot headed and looses his temper pretty easily. He was abandoned by his parents thats why he came to the orphanage. Yuu didn’t liked to get chummy with others because of his personality and the fear of losing his family. In the end when it appeared he finally found people he can smile with, they were all taken away by the vampires. Yuu made an oath to avenge his family and in order to that he was ready to do anything. He became a part of the Imperial Army but he wasn’t allowed to go for actual combat since his hated for vengeance and thirst for revenge was slowing down his growth and skills. He was able to overcome them by creating a new family and decided to wipe out every Vampire from the planet. He started to change after staying with his new friends and showed signs of love and emotions towards them. In the end when he found out that his only family Mika was alive, he went to save him even though he wasn’t a human being anymore thinking it was his fault. But still, thats how Yuu was, he could never leave a friend to die.

Next we have some other characters who played a huge role here, starting with Mika. He was the only survivor of Yuu’s previous family but was turned into a vampire by Krul. He had no intention of becoming a full fledged vampire so he lived only by drinking Krul’s blood. He was a kind and caring person who always looked after everyone including Yuu. Even till the end when he was suffering in pain and agony, he didn’t drank anyone’s blood coz he didn’t wanted to give away his humanity. Then we have Shinoa. A kind and cute girl who was the leader of Yuu’s squad. She always keeps a smiling face but deep down it feels as if she is hiding a lot of pain, but no matter what happens, she is always ready to take blame for her comrades and stand out for them. Then there is Yoichi who joined the Imperial army in order to avenge his sister. He seem to be pretty fragile and weak from his personality, but he is still gifted since he was able to accomplish skills which took time for other members to get. He doesn’t likes fighting, but in order to save his new family, he decided to fight at the front lines with his friends. Next is Kimizuki who is also fighting for his sisters sake. He seem to be pretty arrogant and cocky, but still acts like a family member and looks out for everyone. Lastly we have Sanguu, a blonde tsundere who in the beginning had the impression of her squad members filled with amatuers, but spending time with them, she get to know them well and started to open up to them. I really love all these members since they all had a unique personality and knew how to lighten up the mood and always ready to help each other.

The animations and music were good and all but I was not satisfied with the backgrounds of the outer scenes. The outdoors drew a huge contrast with 2D characters and also the wrecked buildings, so it was quite disappointing. Still I was happy to see that they were able to bring out the perfect scenario of an aftermath disaster with all that destruction. Well the character development was good and it was great to see some cute characters especially the vampire queen Krul, she was so cute and adorable and also my favourite. I really had fun during the time when Yuu met Mika at the time when he was thirsty for blood and was dying from inside. Yuu didn’t minded if ge became a vampire, he was ready to give his blood to him, but as long as he stayed alive, that’s all mattered to him. In the end, they both get to be together, so I was quite happy since he got atleast someone from his previous family back.

To be honest, I was looking for an anime with an interesting story from a long time, and thamks to that this one is one of my best. I am really looking forward to season 3 since I hsveca lot of questions in mind. In the end, even the people who called them family betrayed everyone and let others die for their own selfish benefit. Guren was one of my respected characters, but at the end he gave his soul away to his demon and became a bad person. Even the Hiragii’s didn’t cared for people’s live since they thought sacrificing some will help them to save many people. It seem like a joke coz all he did was backstabbing the people who fought alongside him. I wished all the the Imperial Army wipes out, and the story continues with only our remaining protagonists and the vampire. Well I hope season 3 will be announced soon and it’ll be more interesting. So, if you are looking for any action and supernatural anime, its a perfect choice for you.

One thought on “Seraph of the End”