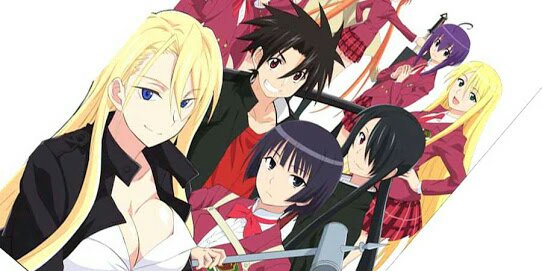 Here we are with another anime focussing on immortal protagonists with a few trivial conflicts. I don’t know about you guyz but I sure was curious to know what UQ means in UQ Holder. After looking it up in a japanese dictionary, ” eternity ” was the only word which seemed related to the title. It is pronounced as ” Yuukyuu ” meaning more or less ‘ eternal ‘. So basically the title means ” Holders of Eternity “. Well these kind of anime seem pretty cool coz we have the impression that the main character is technically invinsible since he can’t die, so it’ll be fun watching them grow stronger and stronger and fight with other opponents who are immortals as well which may result in brutal injuries and bring some real experience of battle to the death.

The story revolves around Konoe Touta who lost his parents 2 years ago in an accident and started to live with a girl named Yukihime and was also told that she was the one who saved him. Konoe’s dream was to leave the village and go the tower structure rising to the space which was even visible from the village. But due to some reasons Yukihime didn’t wanted to let him there, but after some time when a bounty hunter attacked Yukihime and killed both her and Tota, he was told that her real name is Evangeline A.K. Dowell and she is not human but a vampire who had lived for over 700 years and in order to save his friends he drank her blood and became an immortal like her resulting in unleashing tremendous power. Soon both of them decided to live the village in order to keep it safe and decided to head towards the city. To Kota’s surprise, he came to know that there are many immortal beings living on the planet and they all possess different kinds of immortality prowess.

Soon after they met another immortal Kuromaru who was sent to kill Yukihime but after fighting Tota one one one, she realized that he is someone who thinks deeply for his friend and can do anything for them, so she decided to tag along in their trip to the city. The thought first popped on Tota’s mind, and that was to create an organization of immortals who can live together happily and always keep everyone safe. But for his surprise Yukihime had already built such organization known as UQ Holder. It was a place little far from Shin-Tokyo where mortals and immortals live together and take on missions to help the society. Now to join the UQ Holders, Tota and Kuromaru had to take an exam which lasted for 7 days, but they were able to pull it off and joined the group. Now as a member they were assigned to do multiple tasks and missions which always ended up as a good lesson for both of them. But at the end, the main story lies as what is the reason which is making Tota to go to the topmost of the tower? Well if you’ll follw the anime, it’ll end up pretty quickly leaving you clueless, so better go with manga.

Now lets talk about our main protagonist, Tota Konoe. Tota is the grandson of Negi Springfield which he came to know after joining UQ Holders. He seem to be pretty lively, energetic and ofc a lot friendlier then others. He tries to make friends with everyone he meets and vows to protect them. Tota was told that his parents died in an accident, but after watching the whole series, we came to know that he was never born like a normal human but was actually created by merging 2 different genes, in simple words he was a clone. Tota wasn’t that much depressed after hearing all this but the thing that matters to him the most is if his grandpa is still alive or not. He didn’t met him materially but his projection from far away in between the series, thats when he was told that Negi is still alive but in the hands of the Mage of beginning. Tota was not much of a fighter in the beginning of the series, but since his body contained genes of Negi and Asuna, he had quick recovery and fast learning skills.

As for the other characters, we get to know quite a lot of them during the episodes, but it was disappointing that the characters shown at the beginning didn’t get to make an appearance in the middle or end. So to start of, first we have Yukihime also known as Evangeline A.K. Dowell. She is a vampire who lived for around 700 years and she was the one who created the UQ Holders. All these years Yukihime had loved 3 people in her life, Nagi, Negi, and Tota. She still has feelings for Negi since she got to spend most of her time with him and wants to protect and get him back from the of beginning. Well she may seem a little scary when she gets mad, but still she doesn’t likes to pick fights without a reason. The same is for Kuromaru who was Tota’s first friend after he left the village. She also has some family problems which is one reason why she has no fixed gender. She appears to be a boy, but inside she is a girl which can be explained from her love for Tota. Then there are other characters like Karin, a quite and silent type girl devoted to keep Yukihime safe but gets jealous when sees Tota get close to her, then there is Ikku, a UQ holder member whose body is implanted with cyberetics means he is partially a robbot but still possesses human desires and thoughts, lastly we have Kirie who possess the ability to reset and restart time once she gets killed and comes back to her last savepoint, not to mention she is also one of the contenders who wants to get Tota’s love.

The visuals and soundtracks are nothing special, it may have some good OST’s but can’t say for all of them. The opening Happy Material and the ending theme Steady Go were pretty nice and seemed to fit well with the show. As for the character development, whenever we go with an anime with around 12-13 episodes, we expect great character development, but this was a good example of crappy character development. Random villains with unknown powers trying to kidnap a hero and after getting beaten up the same villain shows again. Same for the main protagonist, in the beginning he wasn’t much skilled but in the last few episode he got so many powerful transformations one after another but still wasn’t able to defeat the villain. Most of all the anime contains the tag harem just because it was told once that Negi had a harem of 20-30 girls, but after going through the entire series, it seemed pretty misguiding.

Personally I would recommend if anyone wants to watch this anime, you should go with manga otherwise you’ll definitely regret it. I was expecting a lot after watching the beginning episodes, I was sure something interesting and new will come up in each and every episode. But the last 3 episodes were so messed up, it was like I was completely lost with so many things going at such fast pace. All the past memories, how Yukihime and Nagi met, how she felt in love with him, then birth of Nagi’s child, his career as a teacher at age 10 at the academy, his relationship with Yukihime and Fate. It was all like a blurr, everything was told in an instant that it was hard to keep up with the story. And who would have expected that after transforming so many times during Tota’s fight with Negi, he’ll still loose and in the end they retreated with no ones victory or loss. It was like around 30-50 chapters were skipped in those episodes disturbing the flow of such a good series and making it imbalanced. Well take my opinion, if you are looking for shounen, you’ll find many anime 10 times better than this, but if you wanna give it a try, I can’t stop you since its your choice.