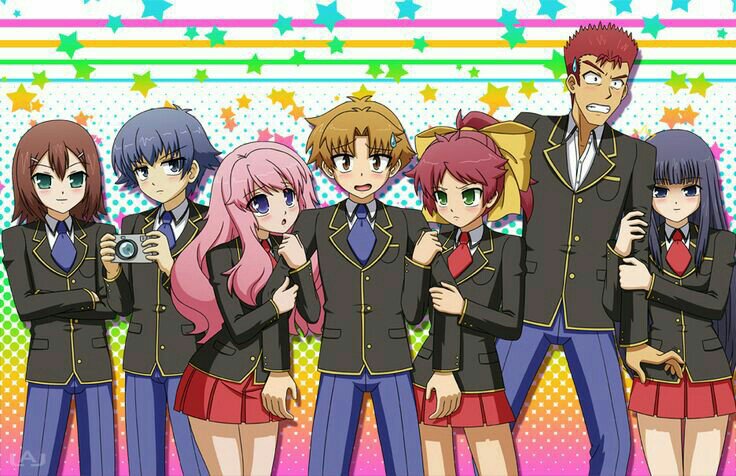 Academic score is not the only thing that determines if a student is smart or not. That is the moral of this anime. All those summon battle seem meaningless in the beginning if you compare academic scores of class F and classes higher then them. It may seem that there is no way they’ll be able to beat Class A coz Class F are idiots with lowest scores. But in the end they won against them by fighting fair and square. At times like this when you have a big disadvantage against an anime like that, the thing that determines the final outcome is a good strategy. Well I am not fond of this education system, but it sure seem fun since students at bottom level may give it there all not just to get good marks, but also to get good equipments from the other class. Now then lets move forward and see what this system is about…

The story revolves around Akihisa Yoshii. The main baka in the story. Because of his performance in the placement exam, he was designated to class F. Because of the unique system followed in his school, the students are divided from class A to F. Depending on the grade, the school supplies are given to them from best to worst. Like for example class A have the most intelligent students and thanks to that, they have good supplies of desks, table, personal cafe and much more stuff. As for class F, they’ve got to have the worst grades in the entire student body and coz of that they use cardboard boxes as tables, and worn out mats. Now this is where the summon wars helps them to get back their supremacy by challenging classes above them in a battle. Now lets see how this battle works. First the two representatives of the class are decided and their goal is to defeat the class rep which decides the battle.

Then in order to fight against each other, the most important thing that helps to win against a strong apponent is tactics. Its not necessary that the students in class F have got low score in all subjects, maybe they must be class B level in one or two subjects or maybe class A level too. Now to begin the summon war, a teacher is required who can activate the summon field. The HP of there avatar is decided based on their last test in that particular subject and once it reaches zero, the student had to take remedial lessons from a teacher they named ‘ Iron Man ‘. Now what was the reason which led the F class to start this war ? In the beginning, Yoshii wanted to win the battle against A so that his friend Himeji who was an A class level student but couldn’t score in the placement because she was sick, and wanted her to transfer from F to A class. But she didn’t accepted the offer since everyone in Class F were like family to her. So this is how the everyday life goes by with our main character Yoshii and his friends goofying of and planning to win against class A to show that academics doesn’t decides the smartness of a student.

Now lets talk about our main protagonist, Akihisa Yoshii. Aki lives alone in an appartment. His parents and sister were oversees. He is titled as the Baka in the story coz if many reasons. First, he doesn’t uses his expenses carefully, mostly he wastes them in buying games or photographs of Hideyoshi from Mutsulini. Second, he doesn’t studies at all and mostly gets distracted easily, even in class he doesn’t pays attention. Despite his idiocy, Aki is a really kind person who cares for his friends more than anything. This is the main reason why Minami and Himeji started to like him. The thing I like about him is how dumb and clueless guy he is. Most of the time he gets influenced by Yuuji’s small talk and gets into trouble since he is not very smart to figure out what sort of thing he is getting himself involved into. But overall this anime couldn’t reach this far without Yoshii’s idiotic personality and his twisted logic.

Next lets talk about our other protagonists. Lets start with Himeji. Himeji is a quite girl with brains and bust. She wasn’t able to it to Class A coz of her cold and because of that, was transferred to class F. She is like the trump card during the summoning battles since she has one of the best scores in the entire 2nd year. Then we have Yuuji. Yuuji used to be an honourable student too but because of helping a friend he took this path and now, he wishes to defeat class A by acting as a representative of class F. Well he has a very lousy personality and kindof lazy too. Shouko, the girl he helped who is now the class rep of A wants to marry him even if it requires by force. Its great to see how he tries to resist but eventually gets dragged and tortured in her love. Next we have Hideyoshi. Hideyoshi seem to be a cute male but people take him as a cute female. He really is the best character in baka to test not because of his cuteness but also his charm. People always mistook him for a girl and give girls clothes which no doubt looks perfect on him. He is one of the best trap ever. Next there is Mutsulini, a pervert ninja who spends most of his time collecting data on vulgar stuff like taking pics of girls cosplaying especially Hideyoshi, or bust sizes. But whenever he gets a nosebleed after seeing a girls underwear makes it more funny. And lastly we have Minami, another girl who loves Aki in her heart coz of his nature, but because she is flat chested, Aki always points that out and gets a beating from her.

I’m not sure why people don’t like its art style, is it because the side characters are not focussed much ? Well in my opinion its pretty fantastic coz if they had shown more detail on the side characters, psychologically we won’t be able to focus much on the actual character. The soundtrack fits perfectly but the thing I like the most is how the opening and ending theme matches perfectly as it is happy, cheerful and catchy tune. This anime doesn’t follows a pattern for the story, but it doesn’t matter much coz random things also makes an anime funny and worth watching. The thing I liked about this anime are the voice actors who fit perfectly with the characters portrait, Yoshii’s voice was funny all the way, but the best part was the narration. The voice may seem a little dead from inside but it kindof made things more funny.

Overall I really really enjoyed the anime. I personally wished if our world could follow the same school system like them since it seems fun and kindof makes you wanna study for fun. The characters were perfect for the plot as each of them had there own fair share of funny side. Its good to see most of the anime like these which don’t focus much on the protagonists past since it doesn’t suits for anime which are totally devoted to comedy. I really wish we get another season which is pretty much impossible since there isn’t any announcement related to it, but I really wanted to see Yoshii’s more stupidity not to mention Hideyoshi’s cute charm. Finally I would recommend this anime to those who are a big fan of comedy and school life based anime, I’m sure you’ll love it.

2 thoughts on “Baka to Test to Shoukanjuu”