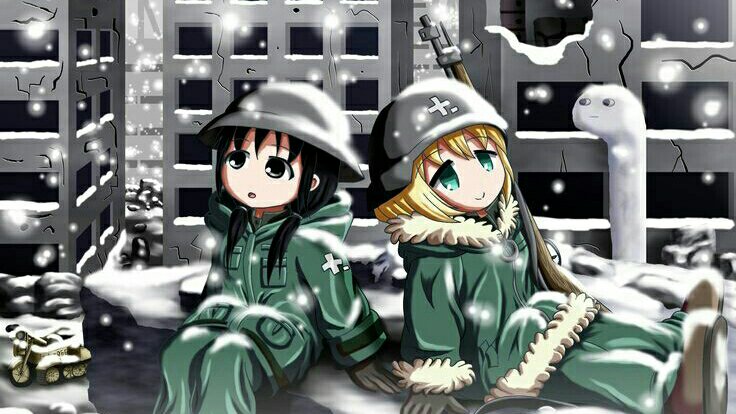 Lets relate it this way… Imagine you decided to camp out with your friends in a forest for a couple of days. You brought all the necessary supplies, from food, water, clothing and other necessities. Now what if you you and one of your friend went out to search for firewood, and not long after that the sun came down. You and your friend are completely terrified coz of strange noises coming from all directions. You took out your cell phone to contact one of your other friend but it was out of range. You can’t find the map in your backpack and didn’t had any food to live through the night. After a little while you and your friend realized that we are lost. Now the question arises how to spend the night without any food, fire and shelter ? I don’t know if something like this had ever happened to you, but watching Girls’s Last Tour brings the same kind of feeling. At such a young age, lost in the middle of nowhere surely brings a feeling of uneasiness and hostility. Now what do you think is the best option in this sort of situation? Give up or try to survive till your last breath? For that lets see what Chito and Yuri had in mind…

The story focusses on two young female characters, Yuri and Chito who are travelling across a barren wasteland in order to survive. Just thinking about that makes you shiver as how hard it must be for them to find there daily necessities. Travelling down those fierce snowy mountains without even a clue where they are headed is not their only problem. They are humans too so its obvious they must be freezing like icicle while moving in the snowy weather with snowfall and blocked roads. Like every adventurer needs knowledge and experience when they travel through unknown places, these two have none of these, they are not even sure when and where there fuel tank might go empty, so all they could do was move forward and hope for the best. When the story started, I was really excited to see where they were headed but all I could see was a big tunnel with some kind of machines lying around. Judging by there conversation, it was clear that they were travelling through it for a long time. It was amazing that all this time, they were able to sleep on that motorbike’s carriage without much problem, seemed kindof hard but I guess they must have travelled a lot to get used to that.

While they kept travelling through different places, they came across many things and places which was like a new discovery for them. It was hard to believe that in that time, marine life was almost extinct, it was easy to conclude from their reaction when they found a wish while searching for a water source. Not only that, they are not even aware about the history of their own world since there aren’t many books left, thats also one of the reason why weren’t familiar with the term God. Wrecked up building, no survivors, weapons and armories lying everywhere, its pretty easy to predict who must be the real reason for all this. Thats right! Humans. Someone said this sometime ago that in our world, humans are the only creatures who are really close to becoming demons since they only care about themselves, can’t control their anger and always look down on the weak. So in order to get rid of that pain and anguish, they start fights which eventually leads to war. I’m not sure how much of this is true, but judging for the conditions our little heroes are going through, makes you want to believe it. The way how these two girls fight and keep moving forward with just there sheer effort and will power is most comendable. Its worth watching them face those extreme hardships and make impossible possible.

Now lets talk about our main characters. First we have Chito. Chito is the silent type among the two, she doesn’t talks anout unnecessary things, but sometimes questions about some really weird stuff like her existence in the world, or is life worth living like this? She mostly keeps a cool composure on most of the situations and thinks about everything rationally. Unlike Yuuri, Chito knows how to read and write, thanks to that she possesses a little bit of knowledge about the current world she is living in. She is also the only one who can ride that motorbike and do a little bit of maintenance. She is a little mature type and teaches things about stuffs to Yuuri whenever she asks her about something. Next we have Yuuri. She is the lively and energetic type who likes to cause trouble and always do things without giving a second thought. As mentioned before, she doesn’t knows how to read and write, thats one reason why she doesn’t understands the true meaning and value of books in that time. She is a bit of glucton, and always looking for food. Her stomach is like a bottomless pit, no matter how much she eats, after a little while she gets hungary again. In the end she is good with weapons and helps Chito out with heavy jobs.

Lets talk a little about the supporting characters. First we met Kanazawa. He was the first survivor out two heroes came across when they were trying to find a way acoss a broken bridge. There meeting was a little out of the ordinary when the bottom part of a building exploded and a bridge was created over the crack. He seemed like a nice guy when he offered his help to get there bike over the bridge and help them get across, in return he tagged along with them till the tower which led to the next level. Kanazawa had been travelling alone for quite a while, so in order to get rid of his boredom, he made maps. One of his maps of that area helped them to get to the bottom of the elevator to the second level. Well he did lost his maps while travelling to the top, but after the girls cheered him up, he gave them his camera and went his own way with the goal of making more maps. Next in around episode 6th we encountered another character who bumped into our heroes when they were in a tight spot. Their motorbike was somewhat damaged and Ishii was kind enough to offer her help. She lived in an old abandoned airbase where she was trying to build a plane of her own so she can travel to different place. She was nice and understanding person which was clear when she offered food, bath and bed to our heroes. Well in the end she parted ways with them, but still she left an impression of never giving up and keep moving forward in both their minds.

Girls’ last tour was awesome not only because of its plot but also coz of the character development. I mean two people travelling on a never ending journey, its obvious they won’t have any sorts of entertainment aside from talking to each other. And even in those conversations, sometimes they brougth some serious topics like the reason of living in such a catastrophic world or how this could have been stopped? The landmarks and background was perfect, it really brought the feeling of travelling in a place with no sign of humans. Next the music and sound effect was also good, the sound of their motorbike travelling through different areas, the sound of the blizzards which was hard to take while moving, the sound of machinaries when they moved into some sort of industrial areas, these all made it look so realistic. As for the opening song, all I can say it, it was cute and sweet. To be honest it really made me wanted to experience that sort of thing, but I don’t think i’ll be able to survive that long. Well as long as I have a good companion, then it’ll be fine. Each and every episode brought something new with new adventure and encounters with things that’s completely new to them. Overall, I’ll recommend this anime to those who are looking for some peacefull and relaxing type anime. There isn’t any action or suspense, so you can enjoy each episode at the same pace from beginninng to end.