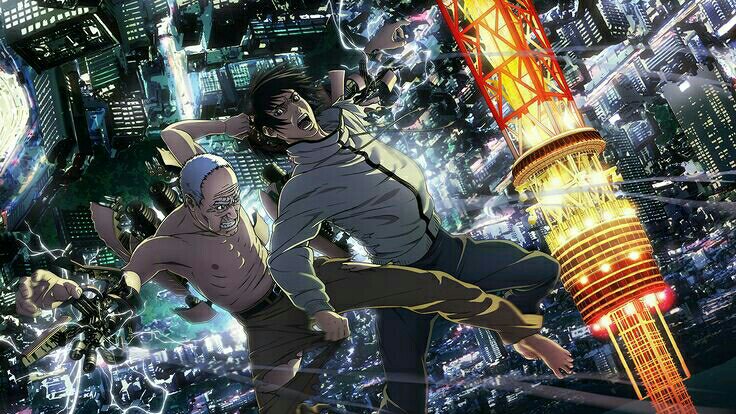 How is it like to live a life where you don’t have to fear about anything? Well its easier said than done, but just imagine if you possessed the same power as Shiro and Ichiro. You will definitely be the most powerful creature on earth not only in strength but also in things which are out of reach of a normal human being, close to calling yourself God. Well I’m not sure if it’ll be a curse or fortune for most of you, but in some way that power might try to corrupt you. As it is said that with big power comes big responsibilities, thats something Shishigami may not have understood coz all he cared about was killing people for fun, take them away from their beloved family, kill innocent children and take away there future and dreams, and try to create a society where only he could remain happy. Not only that, this anime taught us or maybe reflected a little about the things happening in reality. In todays day and age, majority of people don’t really care about their elders even though they are strangers or related by blood. We assume that everything they are going to say is something we hear almost everyday and get annoyed, but we also know that in the end, they are repeating it again for our own benefit. Well something like that was noticed in this series so I brought it up, now then, lets take a look at the story…

The story revolves around a 58 year old office worker, Ichiro Inuyashiki. Ichiro just moved into a house with his family consisting of his wife, daughter and son. He looks pretty old for someone his age thats one reason why he faced so many health issues, but that was something which didn’t bothered the rest of his family. Its true though! It would always appear that his family members are avoiding him and think of him as a burden. Later after a medical checkup when he was told that he has cancer and had hardly 3 months to live, he thought to old about this to his family but none of them bothered to answer his call. Now what could he do? He was all alone without much time to live, he may have thought to spend the remaining time with his family but no one cared to be in his presence. One night when he was strolling in a park with his pet dog, a UFO crashed on him and an unknown stranger standing beside him. We didn’t get to see who were in those spacecraft, but after listening to their convo we could say that they crashed on Earth accidently and were plamming to leave, but before that they decided to revive the two people who died from that accident and implanted some robotic parts to give them a new birth as a cyborg.

This was something which happened in just a few seconds, so it was hard to comprehend what actually happened there. After Ichiro wake up at morning, he found that his body felt strangely light and more active than usual, but once time passed by, he got to know what he had become. Now at first he freaked out with his appearance, I mean anyone would if there head would split open in two. Soon after that he started to think as this maybe one of god’s blessing upon him and he could use this power to help people who are in need. Ichiro liked to help people in a way, like a real super hero. He felt really good when he got to see people smile and thank him after he had rescued them or there family members. But on the other hand as I mentioned, he was not alone that night. The other guy who went by the name Shishigami who was a highschooler had completely opposite thoughts than Ichiro. He only cared about the people he loved, the rest were nuisance and merely toys for him to play with. To him other’s life was meaningless and didn’t cared if few people died in his relaxation moment. In the end this started a battle between these two almighty beings possessing the power of gods. Well the ending was a bit unexpected, but still interesting all the way.

Lets talk about our main protagonists. First our dashing, cool, and handsome villain, Shiro Shishigami. Shiro was weird since his childhood. He didn’t liked talking to people he didn’t knew and couldn’t care less if they live or die. He had a pretty face which made girls fall for him, but had a really nasty personality. His parents were divorced so he lived with his mother only while his father lived with another women and there two children somewhere else. Shishigami was quite attached to his mother and could go to any lengths to protect her. When Shishigami started to use his power for crime and murder, he decided to use these powers to help out his mother in any way he can. Since his mother wa suffering from a cancer disease, he used his power to heal her and gave her new life. But that wasn’t the same attitude with others since he liked to take others people’s lives for granted. Its still a little hard to guess what made him to become like this coz if things would have worked out good for him from the start, then he may have ended up helping people. In the end when he lost all his reasons to live a happy life, he decided to save the mankind from as asteroid crash, but still I don’t think it was enough compared to the lives he had taken so far.

Now lets meet our hero who inspired many people through his actions. Ichiro didn’t got to live much of a happy life after his son and daughter got older. To them he had almost no presence and was always left in the dark. Ichiro had almost no one who he could talk to freely and express his feelings of pain and loneliness, thats one reason why he decided to bring home an abandoned dog and named her Hanako. If he wanted, he could also use his powers to commit crime or take revenge in his family, but he had experienced more than 50 years of the real meaning of life and how it is precious, especially to someone who didn’t had much time to live. At the beginning he wasn’t able to control his powers that well, coz of his old age, he could hardly throw punches at anyone. But thanks to his mechanical strength, he was able to make them eat dirt with just a slap. He wanted to use his power to save as many lives as possible, after seeing Shishigami and how he used his power in such an advanced way, he also tried to learn so he could use those techniques to save people and punish criminals. In the end I could say that he was a good person who really understood the meaning of life and how good it felt to save lives of others.

I have to say, I really enjoyed this series. It was probably one of the best psychological anime I had seen so far. Inuyashiki had a twisted plot of allowing an old character to be the hero and a young character as the villain coz im most of the anime, the hero is a highschool student with cool looks and villain is an old guy with a freakish mind. Well maybe was one of the reason why I got to see some people disliking this series since they didn’t liked to see an old guy as the lead. Some said that it was too much after they saw him shooting a family in their house, and that bath tub scene, it may have made a psychological impact on others mind, but it was okay for a series like this. The opening and ending theme were pretty good too, not to mention the background and all those working of machine things inside there body. Overall it was fun, I really wished if they had extended the series a little bit, but since the manga was over soon, it was bound to end in the anime too. So if you are a big fan of psychological plus Sci-fi type anime, you can definitely go with this.