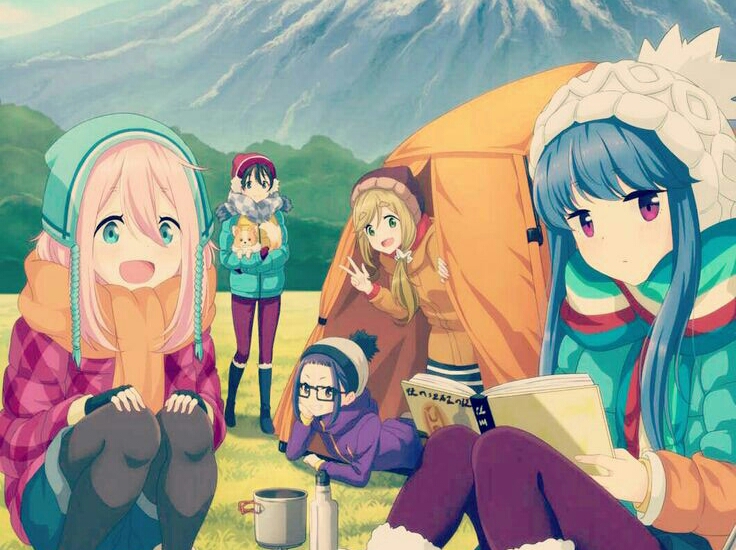 Ahh there’s nothing that can beat camping when it comes to outdoor activities. Well you may think I’m sounding lazy coz camping is something which doesn’t require much physical labour and even a single person can enjoy it, but I like it coz its the perfect way to hang out with friends and enjoy every moment. Thats why its way better than hiking. I don’t think I have watched any other anime based on camping before, I did tried Yama no Susume but the atmosphere felt kind of boring. In the end when I saw someone post pictures of this anime, i took a look at the plot and decided to give it a shot. Well I was really surprised and didn’t thought it would be this much fun while watching some girls camping out. Not only that, I got to learn a lot about camping, like the supplies you need when you go out to camp, how to set up a tent, how to start a fire without much hassle, and how to cook food without damaging the ecosystem. Well these are some of things I learnt from those girls, but I think I’ll learn a lot more in the coming episodes. Well then, lets start with the plot of the story and see whats it about.

The story revolves around a girl named Kagamihara Nadeshiko who just moved from Shizuoka to Yamanashi. She planned to see Mt Fuji with the sunrise and for that, spent a lot of time cycling uphill. After reaching her goal she was exhausted from all that cycling and rested near the camping administrative office. When she finally woke up, it was pitch black which made her terrified and scared. Thats when she encountered a girl named Rin who was camping after taking permission from the office and decided to let her in until she knows how to get her back to her home. Well it was a pretty great experience for Nadeshiko to see someone camping out at that time of the year and had fun with her even though they got to spend a little time together. For her, camping wasn’t something she did frequently, but Rin was used to do it quite a lot every once in a while. After Nadeshiko went home, Rin thought she would never see her again, but for her surprisez they ended up in the same school. At that time Nadeshiko was quite obsessed without outdoor activities and decided to join one of those clubs. It felt bad that people weren’t that interested in joining those clubs at that time of the club, so the outdoor club had only 2 members at that moment. The real fun starts from now as how Nadeshiko convinces Rin and her other friend so they can join the club and go camping together.

Now then, lets talk about our main protagonist Shima Rin. Rin had been camping out alone since she was a little kid. Mostly she likes to spend time alone, and for that she often visits different sites for camping and camp out for a night. Well its not like the camping is free of cost since it involves some trouble regarding money, location, firewoods, food supplies etc etc. Well she is pretty used to this stuff, so all she beings is her tent, sleeping backpack, cup ramen, a portable chair and a book. Judging from her behaviour at the beginning of the series made me think she was a quiet type person who likes to do things on her own. After spending some time with Nadeshiko, there was a little change in her personality and thought since that was the first time she ever thought of camping with someone. She used to be timid and stiff from outside, but after making friends, she started to open up little by little and then started to enjoy camping with everyone. She helps them out a lot since she is the most knowledgable about camping and it kindof feels nice when she tries her best to get along with others.

Lets talk about our cute supporting character Kagamihara Nadeshiko. She seems a little bit odd, not only coz of her personality, but also her behaviour. She caused some serious trouble for Rin in the first episode, from calling home to eating dinner, but its not like she kept her hanging for what she owed. She paid her back few days from then by making her hotpot on her camping trip. She seem pretty clumsy and clutz and ofc that means she makes a lot of mistake. Her goal was to join the outdoor activity club from the start since she wanted a club where she could just sit back and relax without much heavy work. When she found out that the club only had two members and needed more members to get a bigger clubroom and used their combined funds to go out camping together, she decided to invite Rin as she was pretty experinced with this sort of stuff. In the end she decided to join with one other friend making it a total of five members. The thing I like the most about her is her appetite. She eats anything with so much interest that even if someone is not hungry, they’ll get automatically hungry after seeing how much she’s enjoying eating her food, and btw she eats a lot.

I am having a great time watching this series and I think I might start its manga sooner or later. There were many things in this anime that made it worth watching, for starters I think the character development was the most impressive. Since there isn’t much one can do at camping, but after watching them goofing of and having fun made me want to do join them as well. Each character had different personality and behaviour which made each of them stand out a lot. The opening and ending theme were also relaxing. If I had to talk about animation, at first I thought there was a little problem, but after seeing the first episode, I was kindof impressed as even though we were viewing Mt Fuji in a virtual screen, it looked so beautiful. I would personally recommend it to those who want to want relaxing and healing type anime mixed with a little bit knowledge about outdoor activity such as camping. I’m pretty sure you’ll have fun.